There are many reasons why Surrey is one of the most in-demand counties to own a home if you’re a London commuter, particularly if you’re not tied to a five-day week.

Many people claim the popularity is due to the celebrity residents, gorgeous countryside, hardly-touched villages and historic market towns. But the real draw that tops all these is Surrey’s ease of access into London by train. The county is home to ten towns with commute times under an hour into the Capital. These range from the fastest commute (Woking at 24 minutes) to the furthest (Farnham at 57 minutes).
But if you’re looking for the ideal balance between a rural town and a short commute then Guildford could well be the ideal option. It’s 32 miles from London, further away than more suburban places such as Leatherhead, Woking, Dorking and Epsom, but has the second shortest train journey into London at 32 minutes.
It is this proximity to the capital that’s making Guildford popular with the growing band of ‘working from home’ clients I have been helping. These are generally people who work at home two or three days a week while spending the others at their London office. So what they need is a home close to a railway station from which they can ‘hop’ into London if a meeting comes up at short notice back up in the smoke.

The army of people who work from home either part or full time is growing. Working From Home Day took place on June 5th this year and research published by the TUC recently to mark the day revealed that 4.2 million people (or one in seven employees) now do it, up by 800,000 compared to a decade ago.

Guildford, for many of my clients, has proved to be ideal. The town is unusual in that it offers homes within the centre and at prices that are reasonable by Surrey standards.
The town also has a wide range mix of different property types, again a unique feature within the county. For example within the town centre are the newer properties and flats that house the town’s student population while just a few miles out of the town you’ll find charming quintessentially English villages such as Shamley Green and Chiddingfold which feature both large period houses and more modern ‘new build’ estates.
And other than Woking, which has a more ‘new town’ feel and fewer prime areas near its centre and station, Guildford has the lowest average house price of Surrey’s ten main commuter towns, at £431,000. This compares with Farnham (£445,000), Oxted (£467,000), Haslemere (£498,000) and Egham (£481,000).

So if you are considering acquiring a property in Surrey and would like to know more about how Garrington can expertly guide you, please get in touch for a no obligation initial discussion. 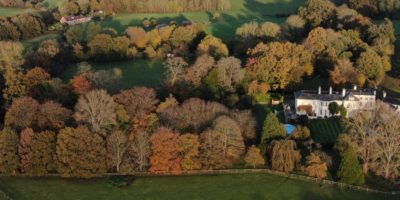